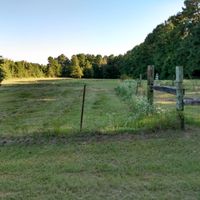 Hello all! I need help. I found many little greenish eggs underneath a few of my kratom leaves. I'm curious what critters could have laid there eggs there? Is there a certain type that seem to really like Kratom leaves? How do I prevent them? I don't like the idea of harvesting leaves that have eggs all over them. But to check each leaf would take forever! Help fellow growers! I must protect them. 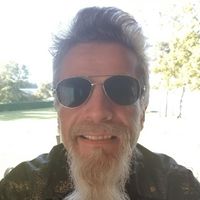 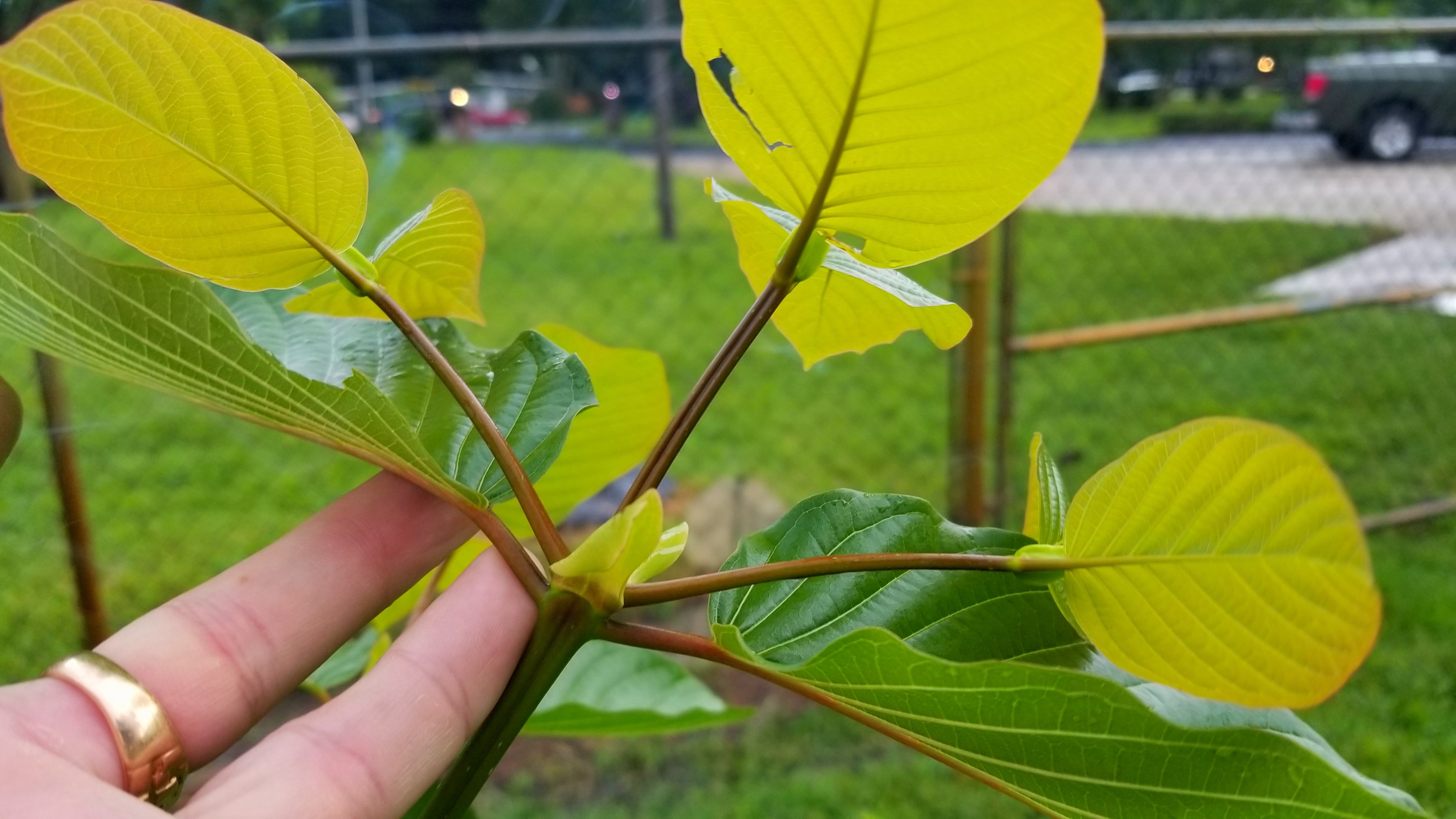 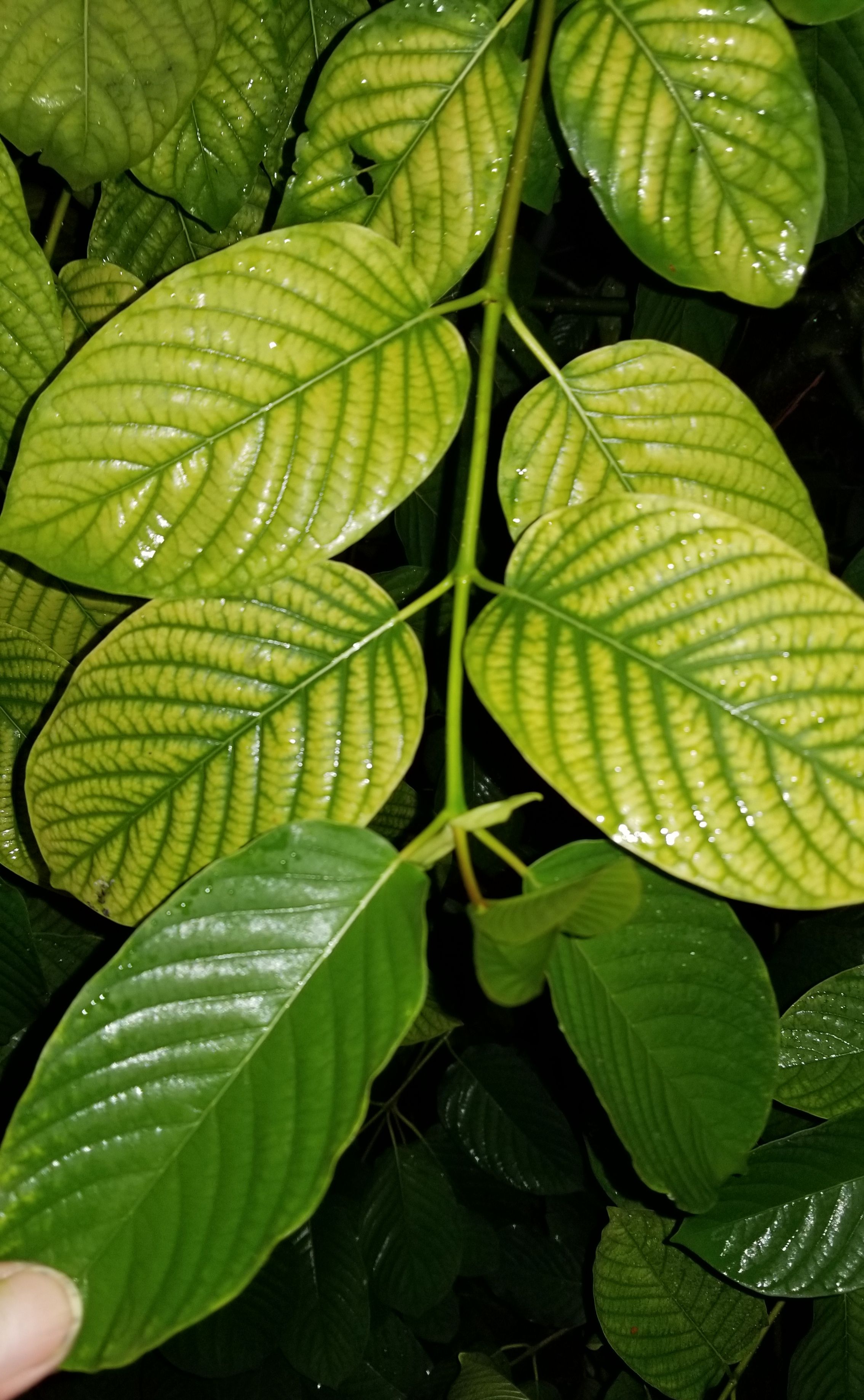 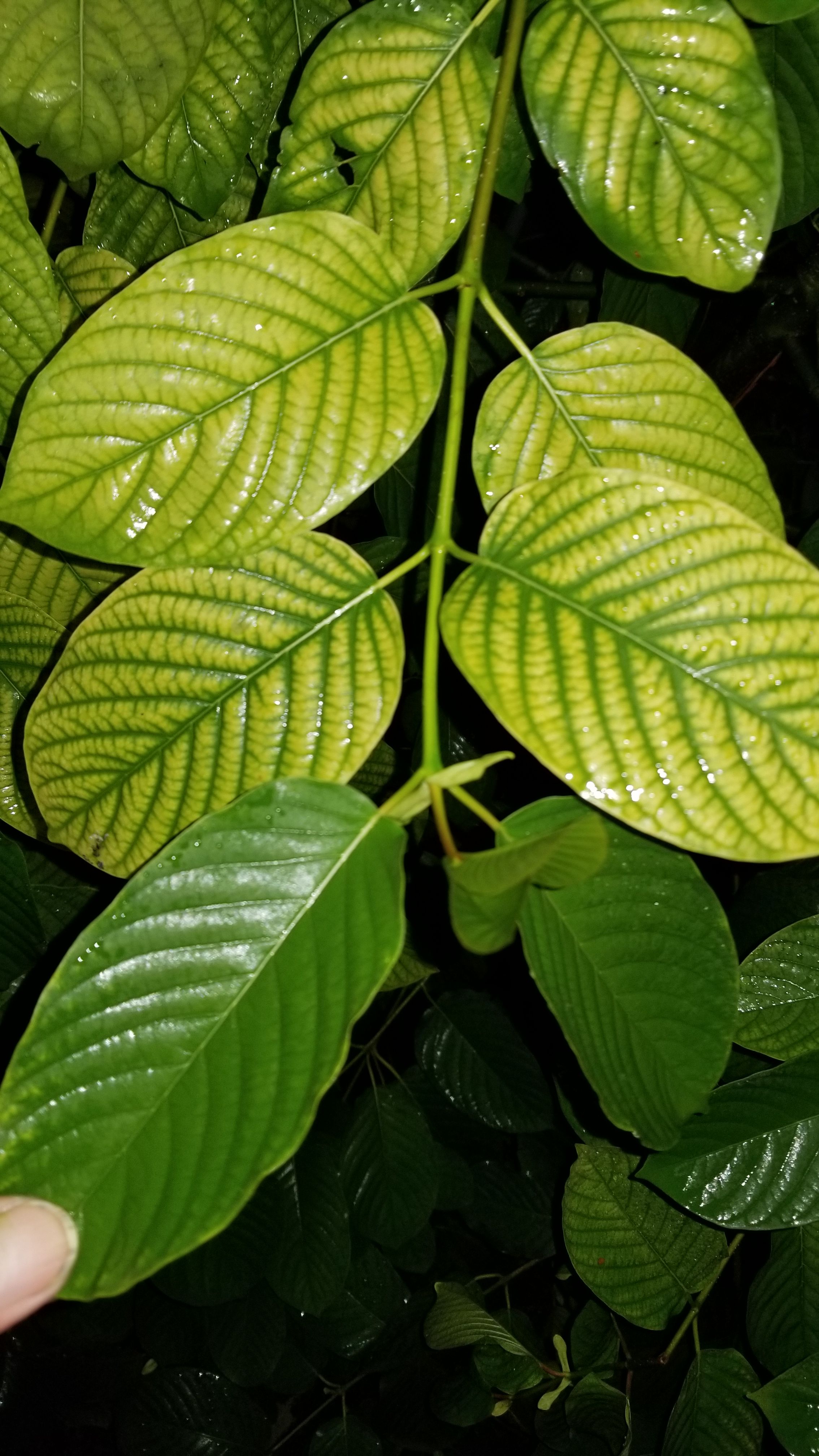 cured in one set of leaves, real quick! 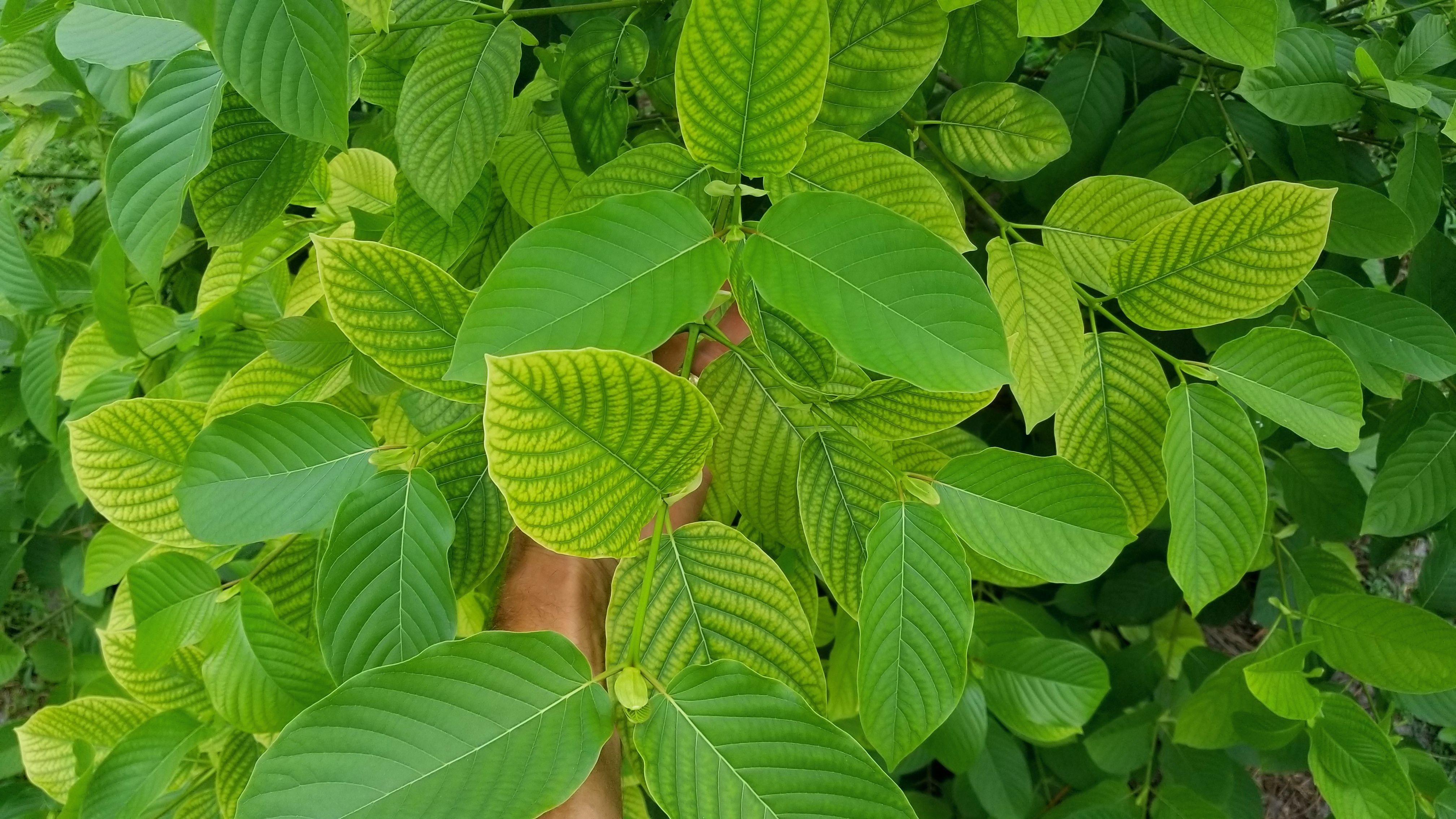 these new leaves are a deep happy green, compared to the yellow sickly looking leaves that preceded. They are a dramatic contrast indeed.

The pH was an alkaline~ish 8.0-8.5 before acidifying it with black Kow to a more tropical rainforesty 6.0 pH. The composted manure is similar to the decomposing organic matter rich vegetational floor of a jungle in more than pH alone.

This new set of nice leaves took 2-3 weeks to reflect the newly available nutrients.  Having the right pH is essential for the efficient absorption of essential elements needed for healthy growth. About 6~7, or slightly acidic, seems to be the sweet spot here in Florida.  YMMV

How are the pH experiences from our KWD members that grow?

First new leaves emerging after 1 day in the greenhouse 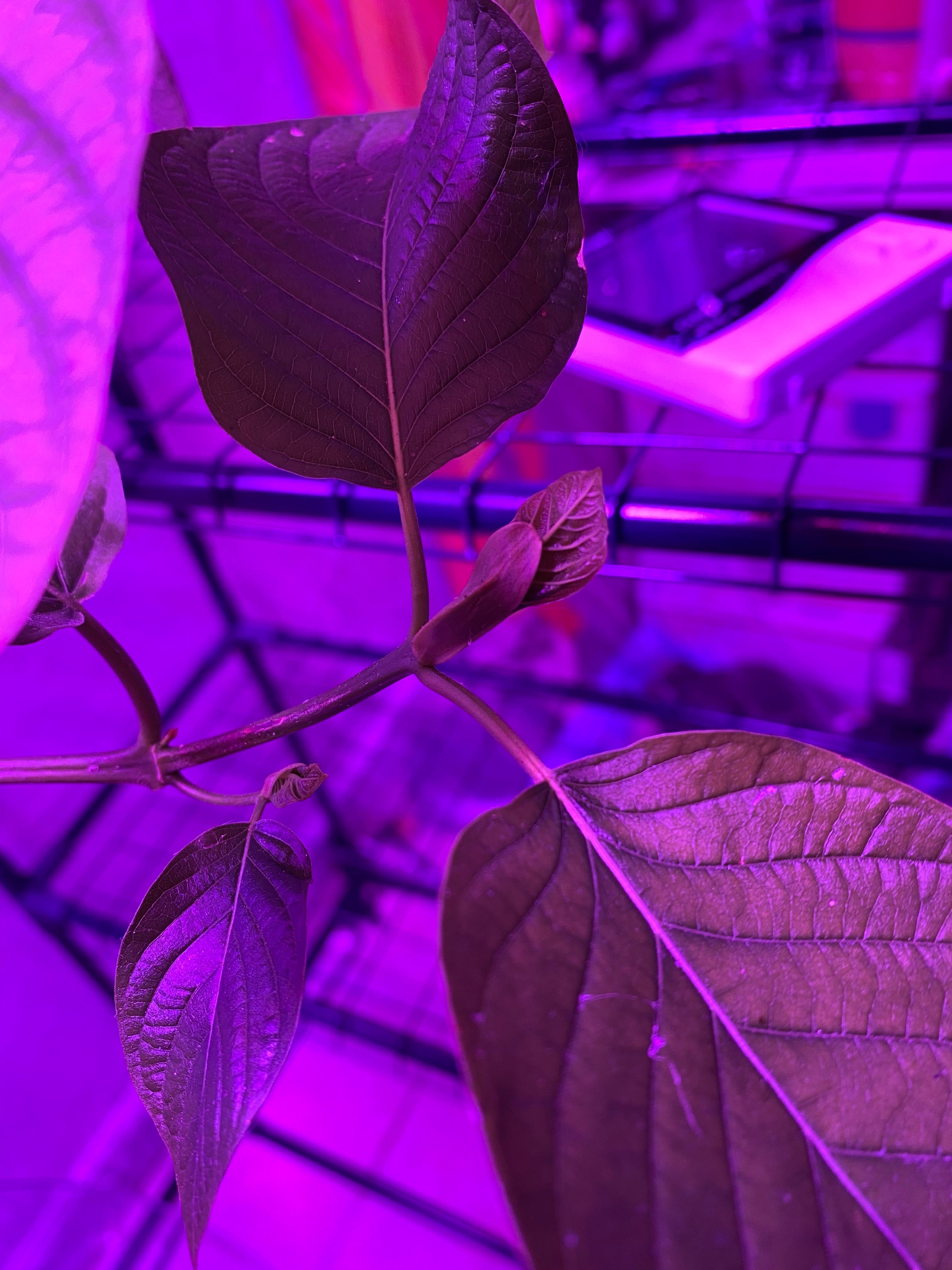 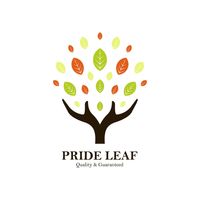 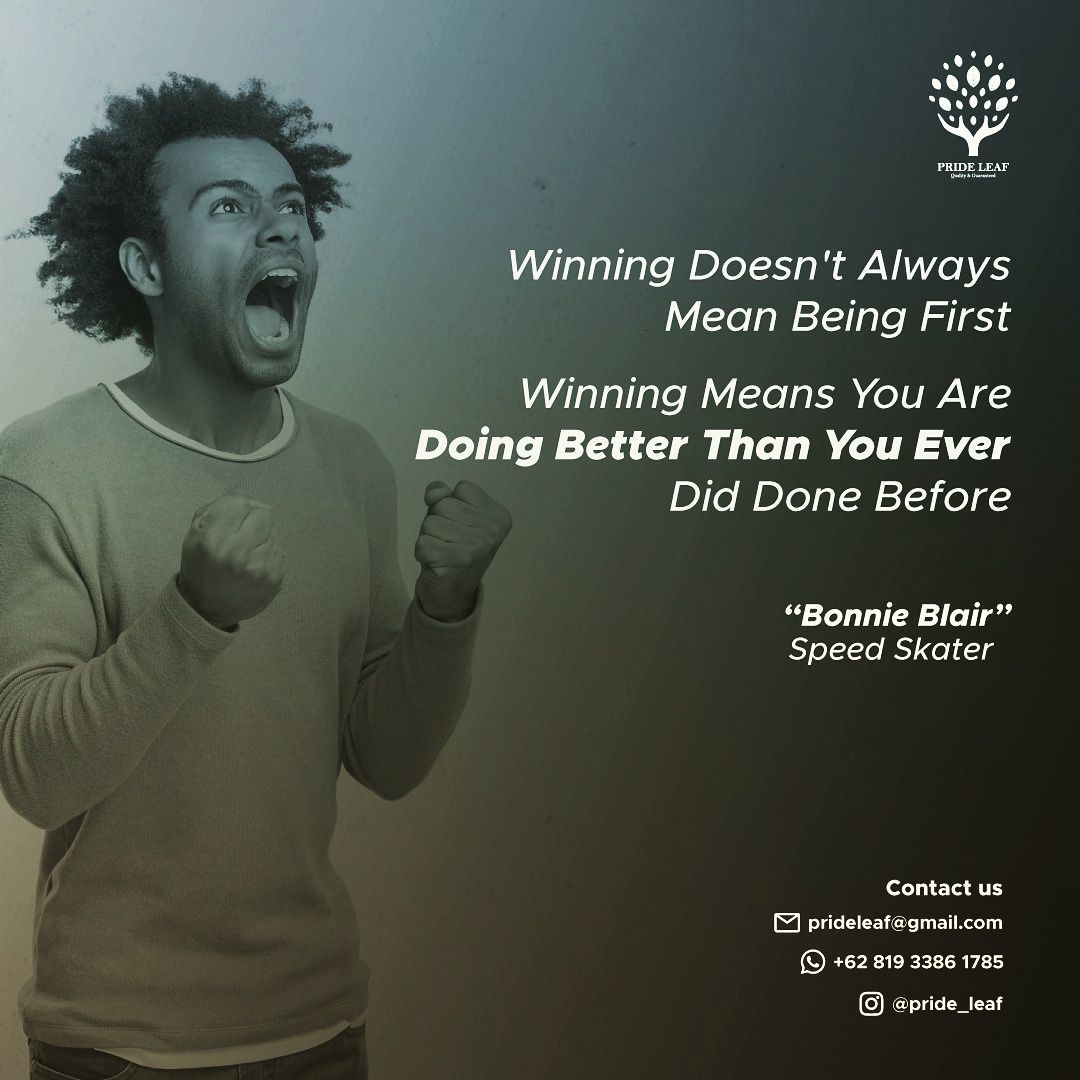 strive continuously to achieve these winner !!!

KRATOM GROWING PART 1: SETTING UP A GREENHOUSE WITH PROPER HUMIDITY AND LIGHT LEVELS IN ORDER TO SIMULATE A TROPICAL RAINFOREST - Kratom Cafe 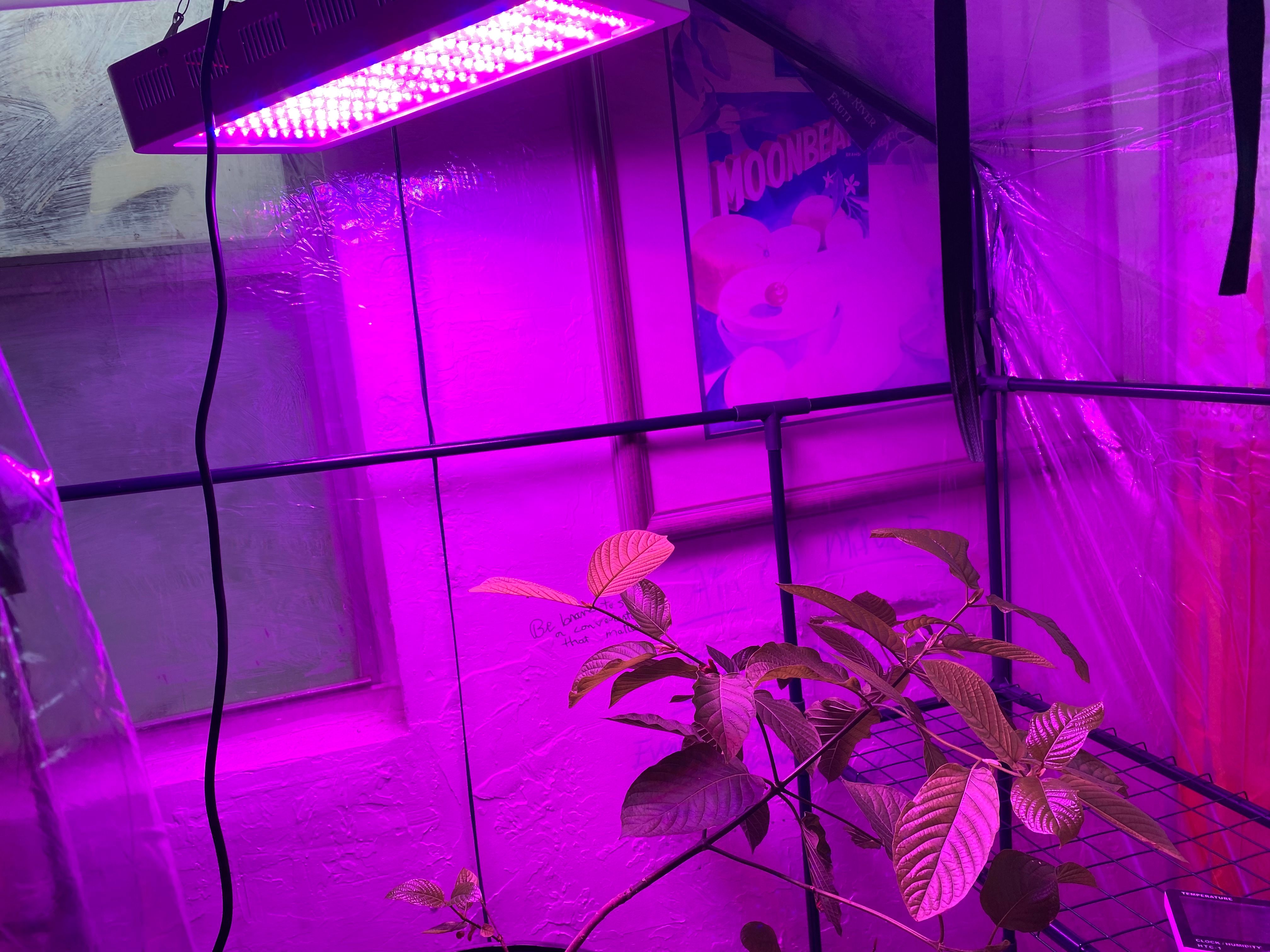 I have been using Kratom for 10 years, and during those 10 years I have always dreamed of growing my own Kratom tree. I’ve tried a couple of times before and failed. The first time I obtained seeds but they were extremely old, the second time I tried to root a cutting and over watered it and didn’t give it enough sunlight.

However, I managed to get in contact with a local grower, and he brought me over this wonderful Kratom tree. Apparently it is 2 years old, which is a major positive, since younger plants can die for numerous reasons, while slightly more aged Kratom trees are much more hardy. Here is a picture from the day I received it. 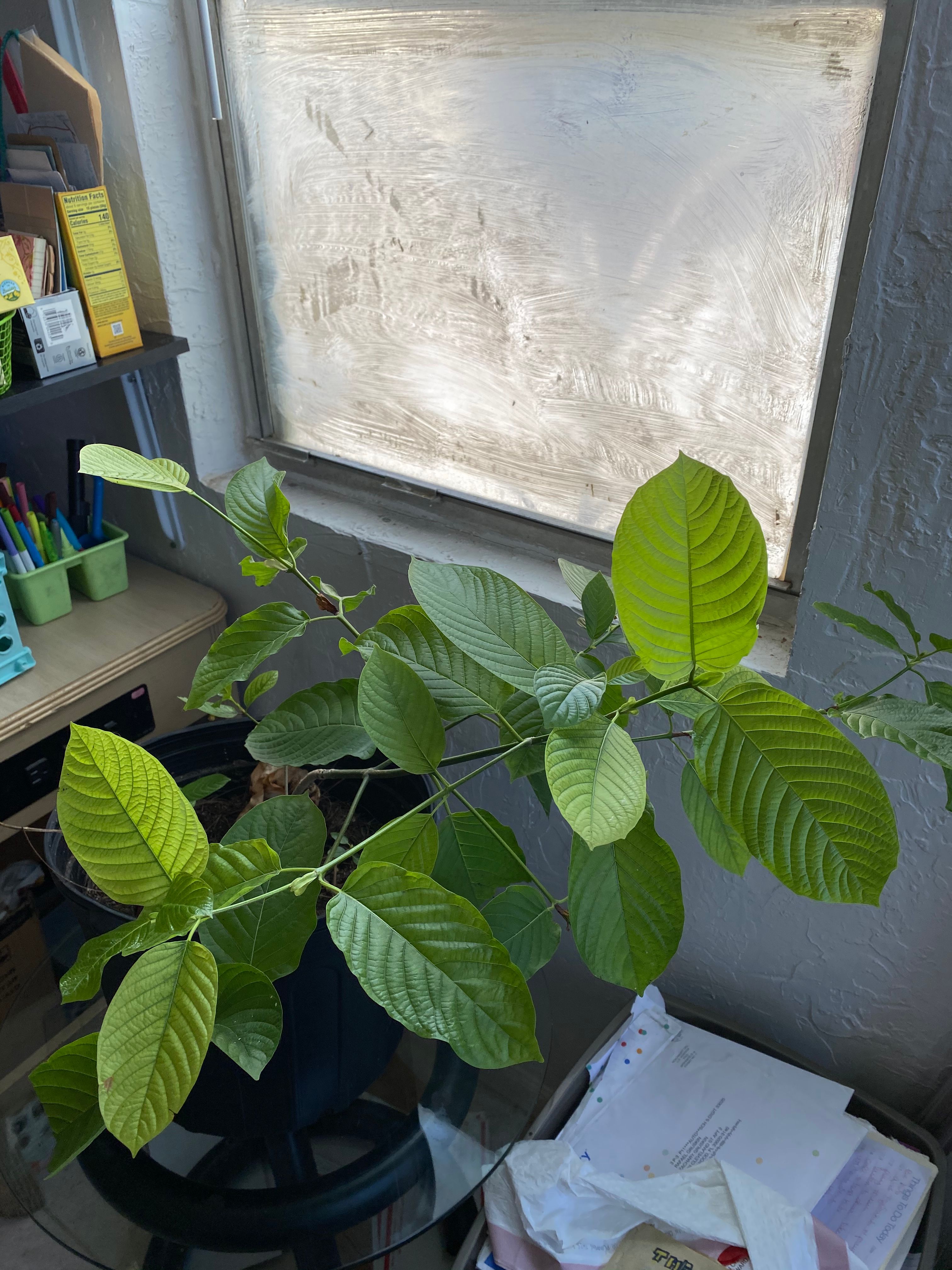 Once I received the Kratom tree I ordered everything I needed on Amazon in order to create a simulated tropical rainforest environment.

Indeed, although the Kratom tree was receiving direct sunlight through an eastern window in the early morning, it was nowhere near enough sunlight since it is just for a short time each day, and the humidity and temperature in the house is too low. If left as is the tree would barely grow, and could possibly die.

The first major essential is a grow light, which has powerful enough light for plants to thrive indoors. I researched for many hours on Amazon, and eventually found a 1,200 W light. The major points of this light were that it came with a hanging kit, so I could hover it over the Kratom tree, and it had red/blue light.

Essentially, red and blue light is the best sort of light for indoor plants to proliferate. In this case, I am using both red and blue light, which creates a deep purple glow. Also, there are some white LED lights embedded within the red and blue LEDs, so this grow light truly gives the Kratom tree every frequency of light that it needs.

Finally, another major ingredient was a humidifier. Basically, the greenhouse alone traps heat, and theoretically could increase humidity if I really watered the plant a lot. However, the humidifier is a much better way to increase humidity in the greenhouse, since it shoots out steam and rapidly raises humidity level, without having to depend on watering the plant to generate humidity, which could lead to overwatering.

I assembled all the pieces together and hovered the grow light over the Kratom tree, as can be seen in the article image.

I then noted the humidity levels in the house were near 55% with a temperature of 75 F, which is far too little humidity for a Kratom tree, and also the temperature is a little too cool for Kratom to thrive.

I turned on the grow light and sealed up the greenhouse, and the temperature rose to 78 F, but humidity dropped to 51%. Indeed, when you increase the temperature of a parcel of air the humidity will drop, and this is bad for the Kratom tree, since the air will literally be sucking moisture out of the Kratom tree at a rapid pace.

I then turned on the humidifier, and the temperature rose to 82 F, with a humidity of 90-100%, which is perfect growing conditions for a Kratom tree. Indeed, this is similar to the conditions in a tropical rainforest, if not a bit better, because it’s a good temperature but not scorching hot. 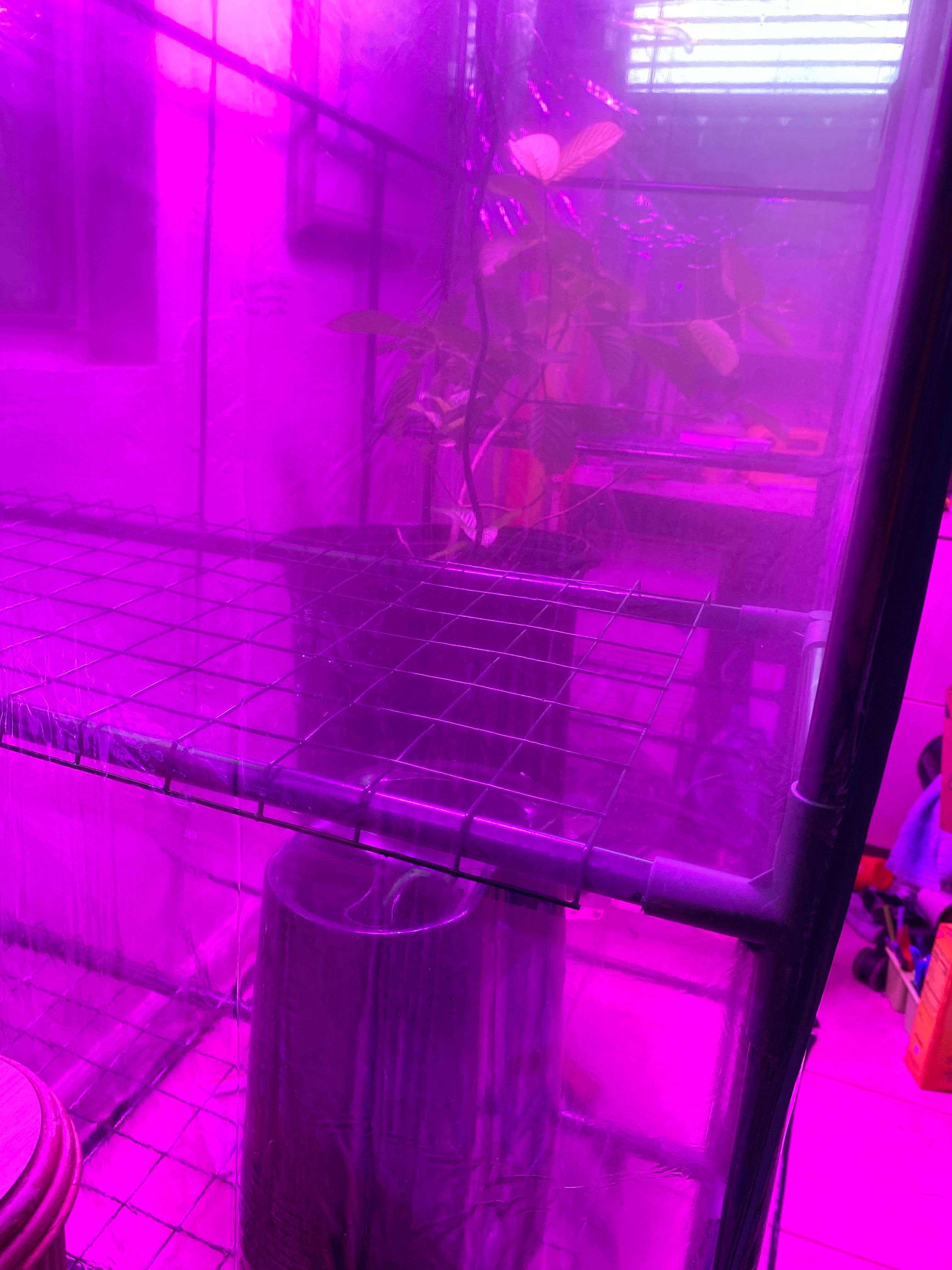 Notably, the whole greenhouse began to fog up as can be seen above. I then turned off the humidifier so that the grow light would not get damaged from the condensation. I then tracked humidity over the course of the next couple of hours, and it remained near 90% for a long time before slowly dropping to 70%, at which point I turned the humidifier back on.

Basically, it seems I will be needing to turn on the humidifier every couple of hours, and will raise the humidity to 95-100%, turn off the humidifier, and then turn it on again when it drops to 70%. I can probably seal up the bottom of the greenhouse better so that the humidity remains elevated for longer.

On a final note, the Kratom growing expert who gave me this tree advised me that the best fertilizer, until it gets comfortable in its new environment, is coffee grounds. In-fact, this tree has been apparently fed coffee grounds every morning for awhile. 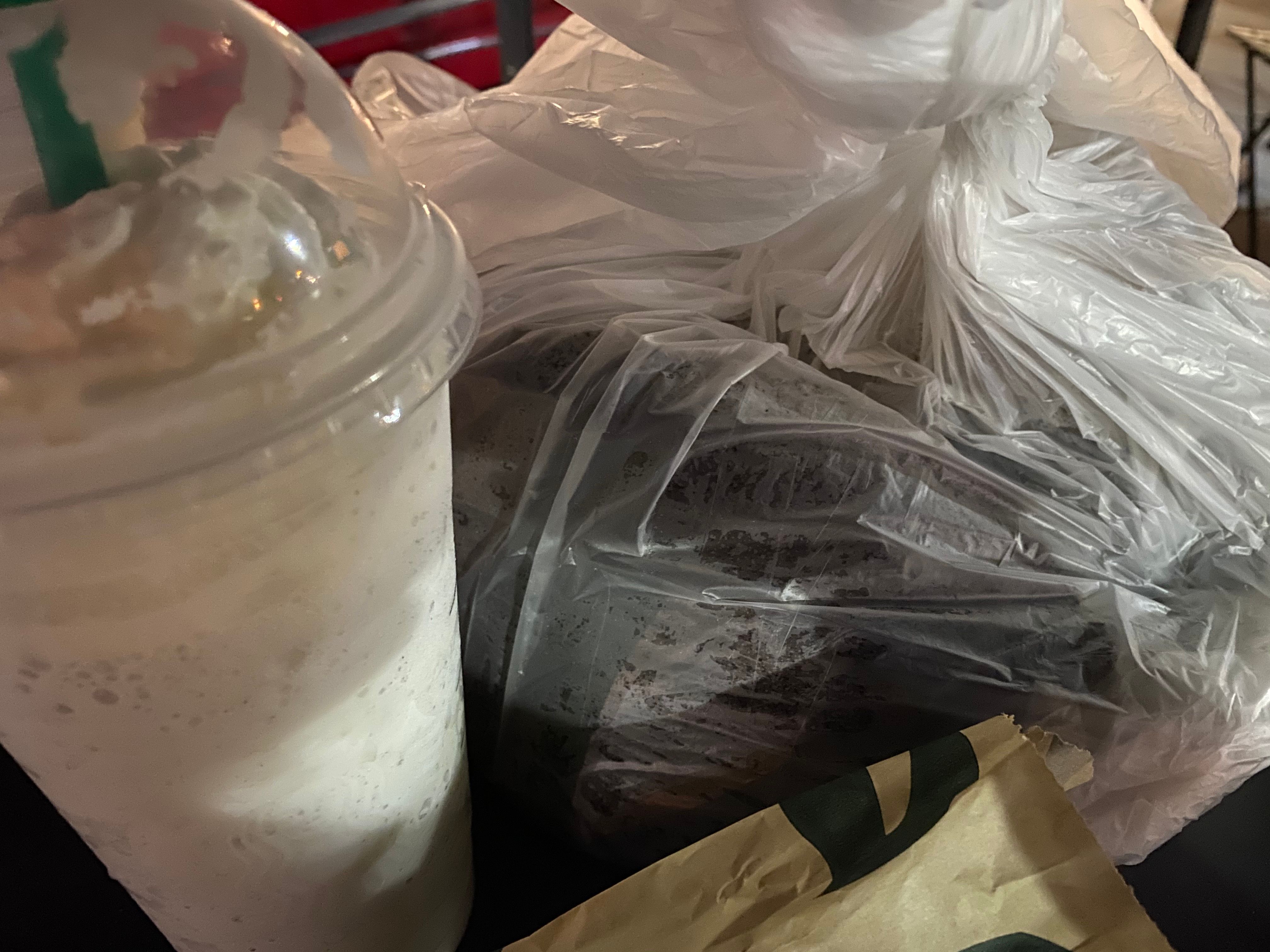 I found out from another Kratom growing expert that Starbucks gives free coffee grounds to gardeners, and so I went to Starbucks and got a big bag, as can be seen above. I am just mixing a small amount of this with water and applying it to Kratom tree occasionally (not every day). 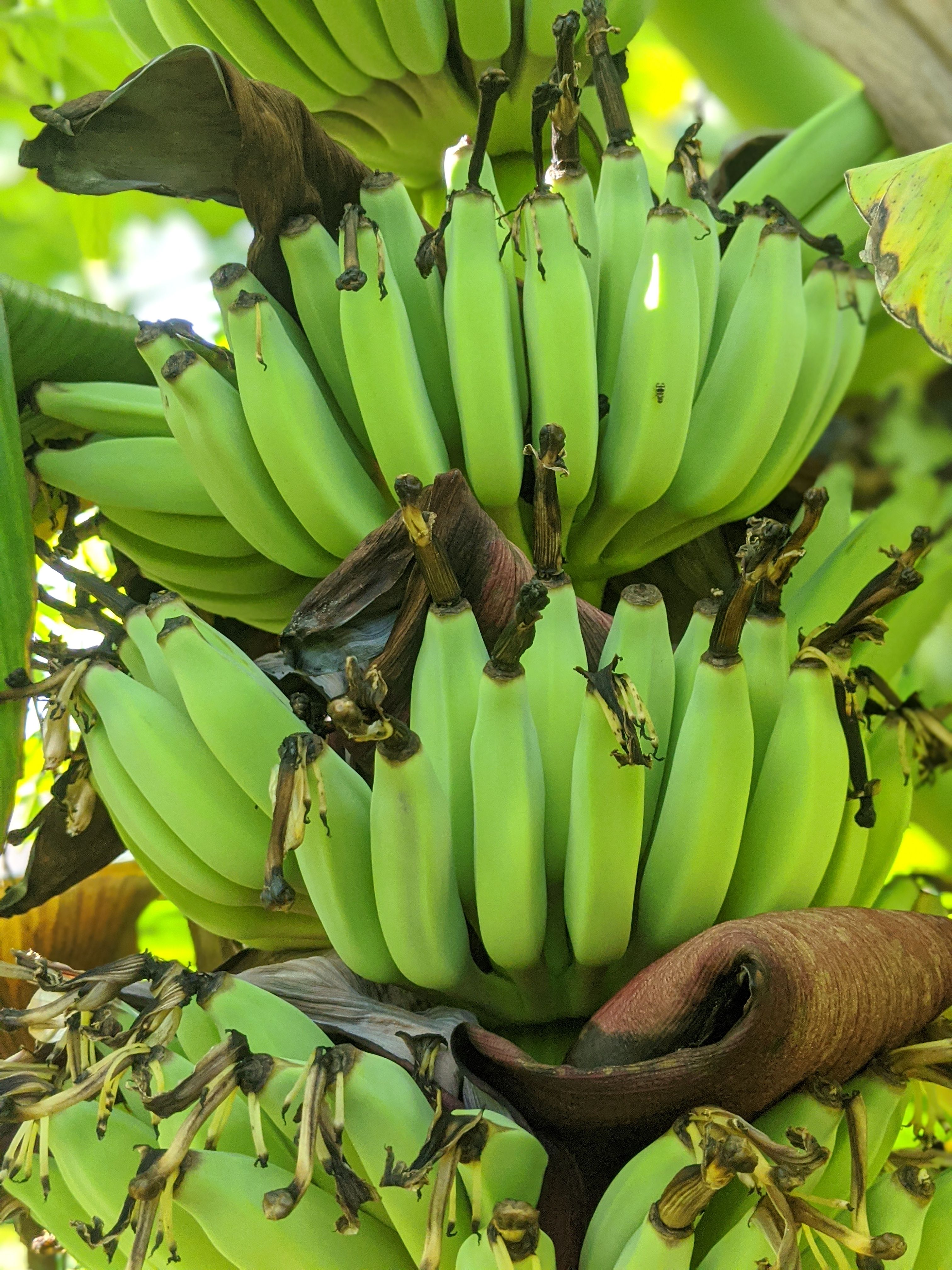 User instruction: This is a test of the welcome tree for new and current users. We encourage our current member base to try out our system and let us know what they think or if there are any improvements we could make. Do note that clicking on any group in the tree will bring you to the group. If you want to click back to the tree go to the main feed or go back a page if you are on a browser. The “next” and “go back” button in the welcome tree are navigational buttons and can be used as a way to navigate the welcome tree. We are thinking of removing them for the final product but let us know what you think.

grow light is here, and it’s so powerful it’s shooting a beam of purple light out the window. For now got it setup sideways, but once I build greenhouse will hover it over the plant 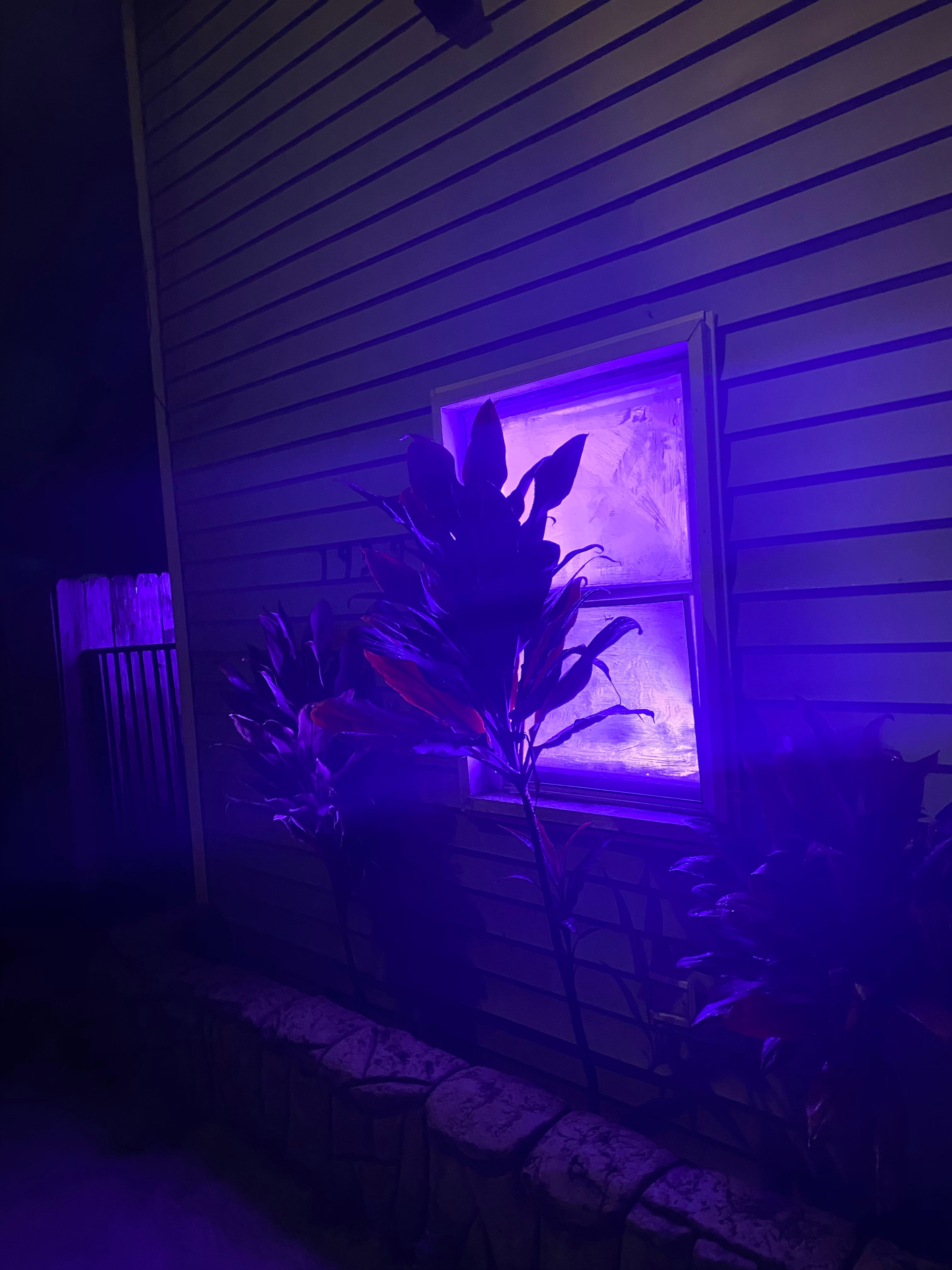 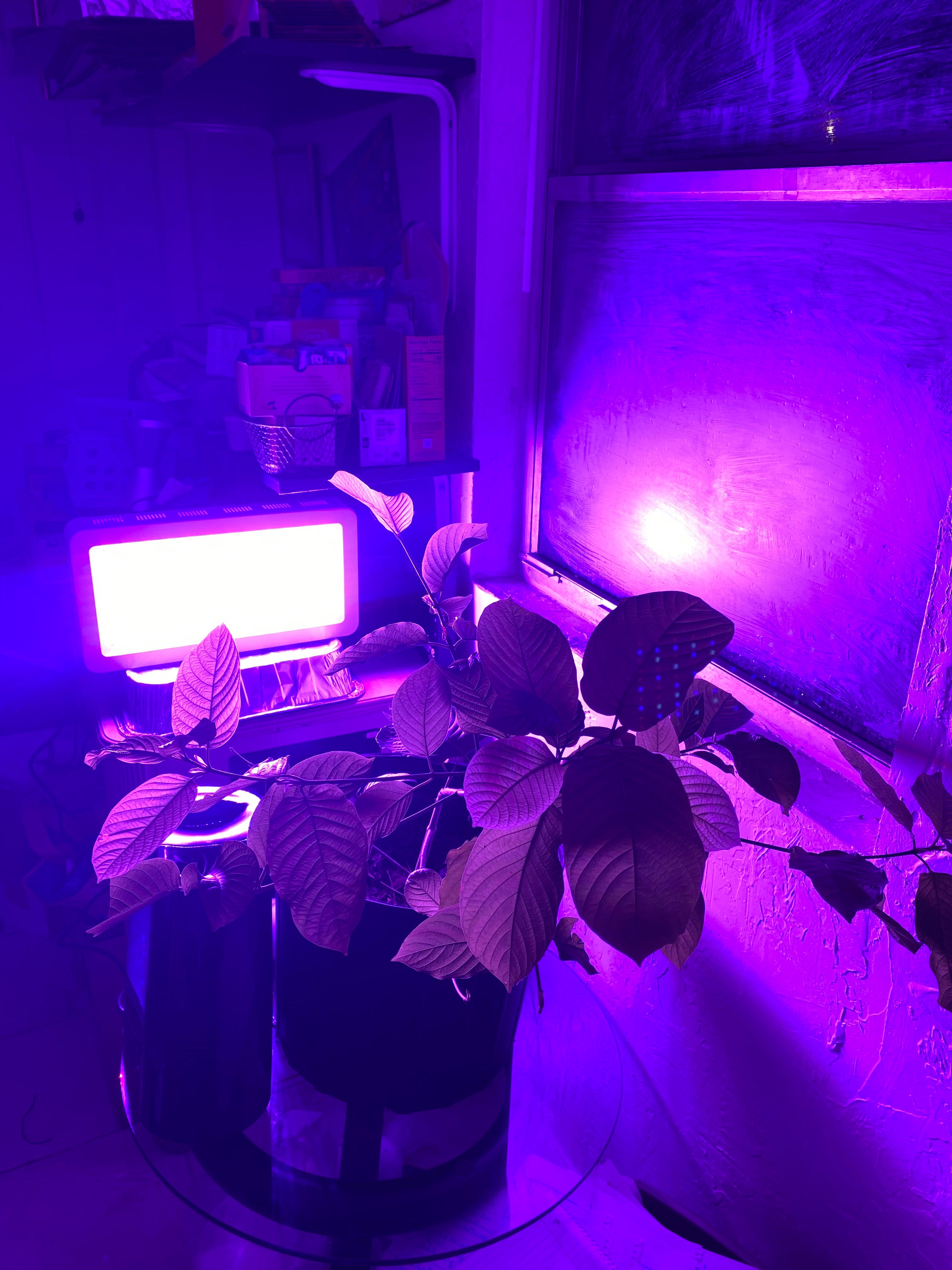 These are the best Kratom powder potentiators according to our users, but you may find that they work just as well for you too. If you want to get more from your Kratom powder every day, then you should try it alongside: Grapefruit or Lemon Juice ...Citric Acid Grapefruit is a great powerful Kratom potentiator due to the fact its enzymes have the ability to break down Kratom powder. This breaking down of the enzymes means that your Kratom will stay in your body for longer and provide you with more benefits. You can take your Kratom powder with grapefruit alone or even with a glass of grapefruit juice. This is something that you can decide depending on what fits into your routine or suits your tastes best. Chamomile Tea Chamomile tea is one of the most popular ways to potentiate Kratom, and it can provide a lengthier dosage each time. However, using chamomile tea is not suitable if you are using white or green branches of Kratom as these are used for energy. Chamomile tea is renowned for its relaxation effects on the body, which can counteract your use of Kratom powder. Tumeric This is one of the best Kratom potentiators as it can have a significant boost on the effects of Kratom and can make it last longer in your body and in the cupboard. Cayenne Pepper When using cayenne pepper with your Kratom powder, you need to make sure that you are using small dosages. Take both together with water, and it can provide a spike in the effects of Kratom. Watercress Watercress is an ultra-hydrated form of lettuce that has been scientifically proven to contain a cocktail of nutrients. Taking pure Kratom with watercress can increase the effects of Kratom, but may not be the most noticeable way to potentiate Kratom. Cat’s Claw This herb contains similar alkaloids that are present in Kratom powder. This means that consuming the two together will potentiate Kratom and make the results last longer. Akuamma Seed This Kratom potentiator has a very distinct taste that may not be suitable for everyone. This is also quite difficult to use alongside your Kratom powder, as it is a very small seed that needs to be ground down before it can be used. It has a very bitter taste but can provide a spike in the effects of Kratom when the two are consumed together. It does not have an effect on how long the benefits of Kratom last, so this may not be for you if that is what you want. Magnesium Magnesium is an effective way to potentiate Kratom, however, many people will not use it due to the effects it has on the body. Magnesium is more commonly used due to the fact it lowers the body’s tolerance levels, but it can also potentiate Kratom. This is something that you should use in caution as it can have adverse effects on the body. It can potentiate Kratom, and many people have found good results with this extract, but it may not be for everyone. Conclusion: Which Is Best For You? There are many different teas, herbs, and spices that can be used alongside Kratom powder to make the effects stronger and last longer. Many of those throughout this review have varying results depending on who is using it. This means that it is important for you to try different ways to potentiate Kratom to see what is best for you. As these are natural potentiators, there is no risk of you trying any of them throughout your daily routine. As well as being a way to potentiate Kratom, the plants, fruits, and teas throughout this review can also offer their own set of health benefits. 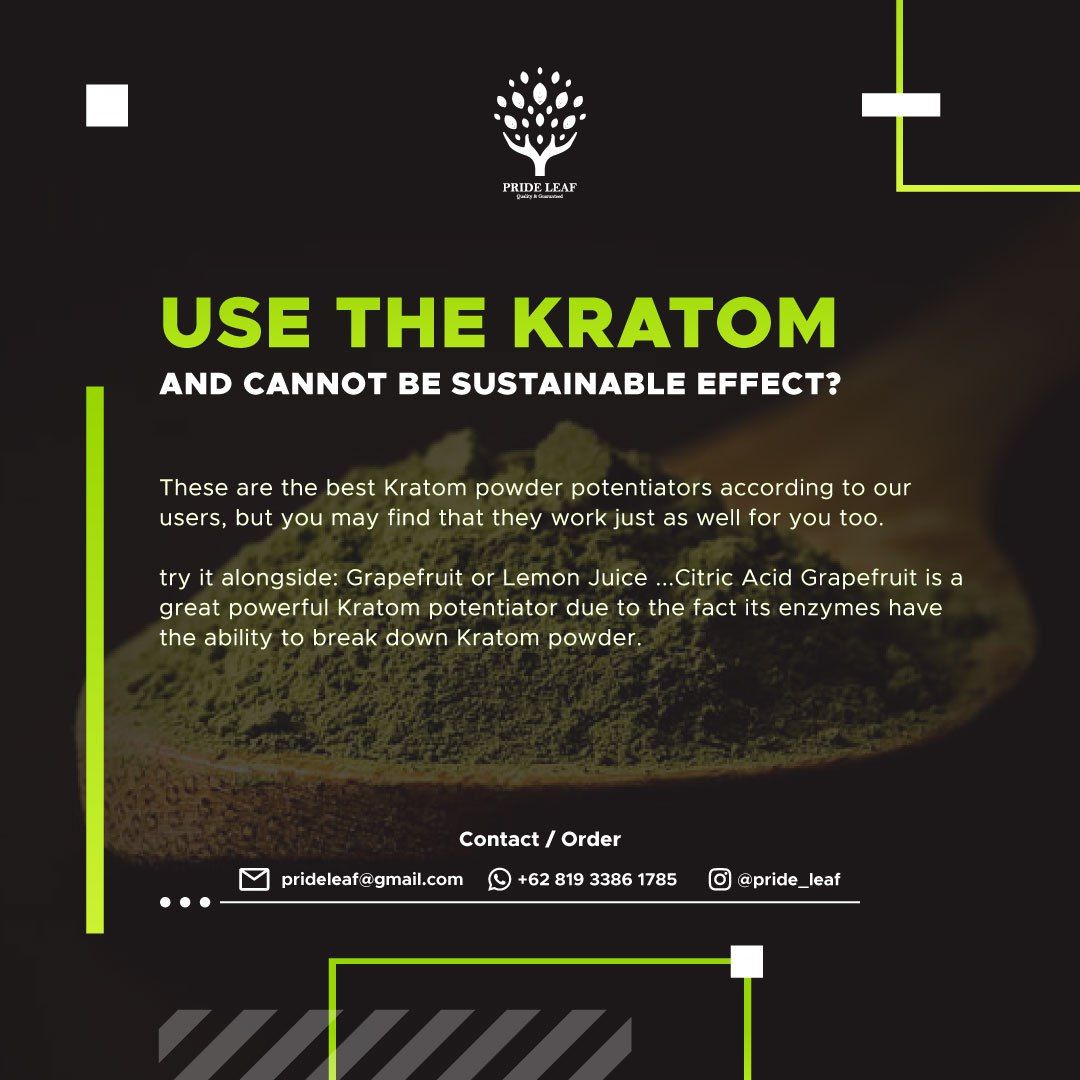